How It All Began

They formed a long term working relationship during their employment at Reid, Collins Nurseries Ltd. at Aldergrove, only 15 km. from our current location. The three partners held key functions at Reid, Collins Nurseries until that company was merged in 1996 with PRT (Pacific Regeneration Technologies Ltd.), a major forest seedling producer in Canada. Reid, Collins had been a major player in forest seedling production, as well as a producer of plants native to the Pacific Northwest and ornamental nursery stock.

After the merger the newly formed company decided to concentrate on forest seedling production which created an opportunity for us, the current owners of Linnaea Nurseries Ltd., to purchase that part of the business that was concerned with ornamental nursery stock and native plants, as well as the production of native plant seeds. Forty acres of land with some greenhouses and production buildings were leased at our current location. Nursery stock, equipment and more greenhouses were moved from Aldergrove to Langley. A production team willing to move with us from the Reid, Collins staff was selected, and... We were in business! 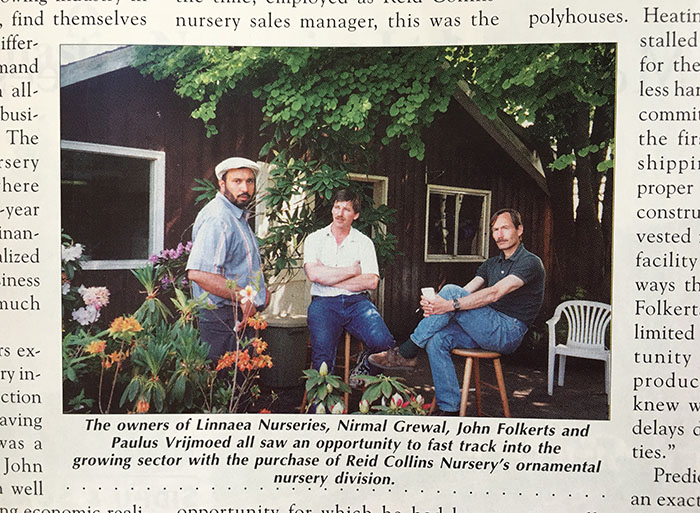 We have not looked back since. Since our start in 1997 we have cleared land, put in drainage and irrigation and increased our greenhouse space and nursery container beds. Our customers remained loyal during the transition and this gave us the confidence to steadily increase our production of high quality nursery product to meet the sales demands. During that time we were able to purchase the property we leased and in 2001 we were able to buy an adjacent 20 acres which will secure production needs for the foreseeable future. Paulus Vrijmoed retired in 2010 but we still call him from time to time for his seed and native plant expertise.

We often get asked where our company name comes from. During the time the idea of a new nursery took shape it was clear we had to come up with a name. As plant growers we were inspired by Carolus Linnaeus (1707-1778), the Swedish botanist and naturalist who established the modern scientific method of classifying life forms binomially (having two parts, one for genus and one for species)

Linnaeus named the Twin Flower, the tiny plant that is found worldwide in northern forests, and which was his favourite plant, after himself: LINNAEA (linA'a) BOREALIS, borealis meaning, of the northern forest.